The black garden ant is the most common ant in Britain, and can be found across all regions of the UK. Keen explorers, black garden ants are most active during the early summer months as they attempt to increase the food supply to their queen and her young.

Black garden ants can often become a problem for gardeners as they farm aphids, which can subsequently attack crops of fruit and flowers.

Mating of the black garden ant takes place over a short period of time, normally during the warm summer months of July and August, when swarms of ants take to the air. After mating, the male dies, and the newly fertilised queen will begin to search for a suitable nesting site where she will overwinter.

The first eggs are laid in late Spring, and it normally takes about 3-4 weeks for the white legless larvae to hatch out. The larvae feed on secretions from the queen's salivary glands until the first worker ants emerge around 5 weeks later.

The worker ants then take on their duties of larval care, nest building, and foraging for food while the black garden ant queen concentrates on laying eggs.

Vitax Nippon Ant Control Liquid is formulated to destroy complete ant colonies without trace. It consists of a sugary bait specially formulated to appeal to black ants - the type that tend to be attracted inside the home. Worker ants take the sweet bait back to the... 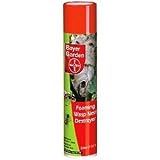